I was reading Mabrick's Post about "Do I belong in High Sec". There is a lot said there and I think I will brush over some of it this weekend. However, what I enjoyed the most, with no insult to Mabrick, was the comment, counter comment, poke, stick, troll, wit rampage through the comments. It was a fantastic read and it helped lift my spirits after a rather negative day.

The post itself did have some basic topic points that roll into my thoughts for today and that also follows in his next post. There is a lot of thought about leaving high sec and should one, what does CCP want us to do, and how to you do it.

Recruiting isn't an easy job. Or, recruiting anything more than any random that wanders along and hoping for the best. Getting people interested in you, being interested in them, worrying about the metagame of spying and thieves and general nastiness. You worry about it because you want your corp to be a stable and fun place for all of its members. But, Eve is Eve.

However, we had many long discussions about recruiting and what we wanted. I, as a newbie, have been very firm in pointing out that newbies are not bad. Brand new players, a few weeks into the game can learn and become solid members of your team. Only finding people who already know thins down the potential for the corp.

I also understand that raising new players is hard. My god, the entire alliance has to deal with me all over everything, erryday. However, a future good player won't be a new player forever. They will grow up and become a piece of the support structure that benefits everyone. If not, that is why we have a kick from corp button. Not everyone is going to fit in but never giving someone a chance due to the fact that they just started playing is also kinda silly.

Potential may be hard to find but it is easier to miss. The hard work is doing that sifting and searching.

Somehow, Diz decided I needed to be involved with it. My protests were ignored. In fact, I think things were decided and finalized after I went to bed without my agreement. Due to my somewhat friendly and mildly social nature I get to talk to talk to people and try to figure out if Ender will eat them or not. At least for THC2. Thankfully, no one has tried to give me any full recruitment powers. I just have a mission to go out and attempt to seek.

THC2 never had any requirements other then getting to know a person and liking them. Well, they wanted intelligence and sense. However, they have always been a small corp. When I started, I was one of 4 who logged on. Over the late winter into the spring we acquired a few old friends and the corp bloomed to its current point which is still very small but larger and more active then it has ever been.

TEXN had been on a bit of a downswing. Life has intruded for many older members. With some people back, they are seeking new blood. We have a list of things we'd like to do and it will be better with more people.

Where I went toe to toe with people was demanding and insisting that the skill point barriers come down and people who had interest be looked at. While we are small gang PvPrs we also spend an awful lot of time carebearing and just playing Eve. If people wanted to do those thing with us and had a willingness to learn to PewPew with us at least socially, what's so wrong with that?

Not everyone has to go off and be deadly 1v1 pilots. Not everyone wants to do that. Pure pacifism is not going to work out but being willing to join the fleet and help out your corp and alliance mates is what is needed. Learn to live in low sec and make smart decisions and enjoy the game. Not everyone has to be the same or have the same interests.

I don't go to high sec and gank, for instance. I've participated in one gank ops as the salvage pilot. I'm not interested in keeping my sec status up high enough for it to be a viable, constant activity. I don't gank miners. I am not interested in bubble camps. I have choices in the activities that I do and that's the type of corporation that we run.

There is plenty of room for a wide variety of people. Cracking the crust on bittervets is exhausting. It's been worth the effort. I think there is a strong undercurrent of energy and interest in recruitment and getting new players in and more Pewpew options going.

It will take a while. I don't see it as a fast momentum thing but I see it as a good one. I'm excited to see who I will get to meet and harass.

To use the current popular picture... 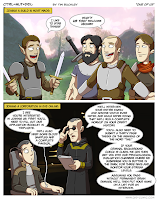