I have a guilty secret.

I like the new Jaguar. I have a thing for urban camo. 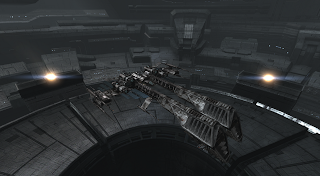 In reality I believe that the paint job is ridiculous conceptually. Camoflaguge spaceships. What the hell? But, my secret lust for urban camo shatters every bit of sense and taste that I have. I love this ship.

After the busy day of local fighting, Diz lured us out on a roam. It seems as if PvP hunger is not so easily quenched. Its fantastic when it comes to us. It is also great fun when it has to be found.

At first I was not going to go. But when Ender agreed to go we restructured took a few minutes to do IRL stuff and then got back together to go roam. We met up with our little fleet of five. Tornado/Hurricane/Hurricane/Drake/Drake

We came upon the Vagabond about 5 jumps into the roam. He jumped through. We figured we'd not be able to lock him. They are fast freaking ships. He held cloak and held cloak and held cloak and finally it dropped. We instantly targeted him and then a series of "What the fucks" echoed over coms as we all locked and pointed him. He then decided to go for the gate. However, Ren was our web equipped hero. Once his shields where down he exploded. No damage control 2 module was rather evident in the speed that shields went to explosion with no visual imagery of armor and structure.

While out scouting, Ender came upon a Hoarder. It didn't seem to be doing much of anything. He bumped it. It let itself be bumped. He bumped it some more. It finally started to burn away from him. After playing with it for about 3 minutes he finally shot it.

It exploded quickly. Then the pod sat there. After he finished looking over the contents of the drop he casually commented that the pod was sitting there. Razor, he who likes to keep his sec at -10 jumped in and ran over and killed the pod. The pod that was still sitting there.

Now the two of them had GCC. Oh well. There was not a lot out and we kept bouncing along, kind of curving home while looking for something else to engage in spaceship violence.

That is how we found a drake in an anomaly. The decison was made to send one of our drakes forward to meet that drake. This is when things get weird. Our drake landed, managed to move 15k and tackle the other drake. The FC ordered us to hold in case one of the locals undocked to assist.

Like clockwork a Tornado undocked. We were ordered to jump in and warp to our drake. The Tornado landed right before us. He took a few shots at our drake and then started to burn away. Sadly for him snake clone Tornado flying Ender chased him down easily.

The drake in the anomaly exploded. Then the tornado. That was when I noticed the wreck of a battlecruiser in the plex that did not belong to either of the parties whom had just become explosions. 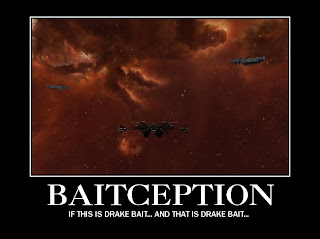 The things to ponder. We went home.

A little later I went out with a handful of the alliance to swing around the area and see what there was to see. We poked our head into a pocket we often ignore and found a Tempest that was willing to play.

Todays bait flavor was a claymore. I've been confusing claymore and cyclone all over the place and Ender has been pointing it out left and right when I mess up here. I just checked the killmail/report and sure enough it is a claymore.

Anyway, he got the Tempest to shoot him. They undocked a loki. When both were aggressed the rest of the fleet (wolf/cyclone/drake/drake/cane) jumped in. When we landed they had undocked a Thanatos.

Everyone with ECM dones sent them to jam the Thanatos. Under the weight of 15 drones, he was jamed and no more reps for the Tempest. As soon as the Thanatos was jamed the Tempest deaggressed. We were able to kill him before he could dock. We then started to shoot the Loki but he docked as soon as he touched armor. The Thanatos then docked behind them all.

We scooped loot, grabbed our drones, and ran away.