The other day I was feeling rather down. Stuff has happened, wars, pewpew, talking, more random war decs, a bit of WTF, some other stuff, whatever.

I was debating running off to live in Derelik for a while. A change of scenery.

But I doubt it will happen.

Anyway, as I was rejecting an invite to a roaming fleet I heard a counter call from a corp mate that there was a battleship fleet floating around the other side of the Molden Heath Ring.

While I can say no to a big (IE 10 ships) roaming fleet I can't say no to a corpie calling me to come shoot at some poeple.

The roaming fleet reshipped a bit haphazardly into an armor battleship fleet. We normally roam in battle cruisers and cruisers. But for a local battleship fight all sorts of stuff comes popping out of the hangers. 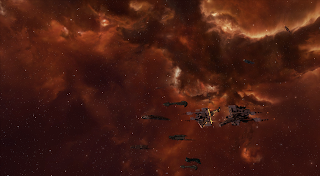 So that and some hurricanes (me being one of said hurricanes)and the obligatory drake went chasing after this 5 tempest, curse, falcon, claymore, something else x2 fleet.

We moved with a slow, sluggish quickness that can only come from an armor fleet.

Two gates out we sat on the Aedlad gate and debated jumping in. They were in Bosnia on the Heild gate. Then their scout jumped into us. He was in a fleet stabber and he somehow managed not to reach the gate before *pop* kill #50 of the month. Maybe it was being webbed by everything in existence...

Not really, but it was a random personal goal.

Well we were scouted. The gate into Bosnia is enormous. Not the best thing. We debated it for a few moments and calmer heads were overruled. The fight wasn't coming to us fast enough so off to it we went. Then, our scout told us they were warping off.

"Go! Canes try to grab something, go go go! You'll die before we can save you! Sorry hurricanes! Try to pin them down!"

*yay for being disposable*

So, off we ran, leaping like fat, broken legged gezelle who had eaten to much, through the gates and into Heild.

"Hi Eve Uni!" we waved. We still had a count down until the war dec.

"Hi!" a few said back. As I said, count down, everyone was behaving.

"We knew you where there. Good bait." We were told.

So, as I ran (slowly) through the system I opened up a conversation. I felt chatty I guessed. "We're honestly just running through," I told him. "After a battleship gang."

And off I went, slow as all fucking hell.

We finally caught up with them 5 systems later. I almost landed on one and just started locking my target as he entered warp.

They went to the station.

So, sulking, the fleet decided to break down, reship, get some logistics, and continue its roam. Those of us not roaming broke off and headed back home.

That was when I catch Ender killing a cyclone that had strayed from the group. He was about 130 off the gate when I landed. I went to help but the claymore exploded when I was still 70 out. I couldn't even whore on the kill mail.

Back home. I had stuff to finish selling and buying in Jita anyway.