On Assets and Female Gamers

[This is may not be the rant you think it is]

I decided to take a step back and look at my assets to recalculate my in game 'wealth'. I've still been spending more then I have been acquiring this month. With my Tengu Project mothballed, I have a lot of isk to make back up. Then, today one of my corpmates decided to sell his Machariel. Since it is my personal 'god' ship I grabbed it for 900mil. They are around 1.3bil on the market right now. He asked for 800 but I gave 900. I don't mind getting/giving a good deal but I also don't want to feel like I screwed someone over.

This plunged my wallet back under 5bil. Then, we did a 8/10 plex and my cut popped it back over 5bil. I've been bobbing around this price now for two weeks. It is irritating. However, it made me step back and recalculate my assets to stop bitching about being poor. So far, everything I've invested a large amount of isk into, I still have.

I have a stack of ships I can not fly. That stack is now with 3.5bil. That is not counting the ships that I can fly. Because I PvP and expect to lose my shit, I have duplicates of everything that I PvP in. I have two oneiros for example, in case I lose one. All of these ships are written off and no longer count to me as assets or investments. They are tools to be consumed, like ammo.

Debating my assets reminded me of a conversation I had a few days ago with a male friend about female gamers. He has been kind enough to direct people to my blog who have no experience with female gamers who game. Comfortable with my own ignorance I asked him what the difference was. He told me that many male players majority interaction with 'real' female gamers (not to be confused with boys who play girls) is that they are there to be social and chat and get help and to be given things. There are some that do the 'I'm a girl and helpless' thing.

I've posted this before, but it deserves it again. 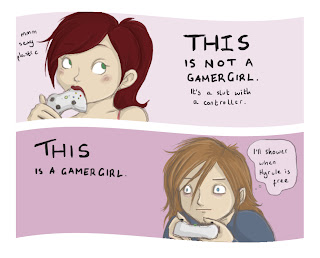 This boggles my mind. I've been playing games since I was a teenager. I normally play with my best friend, whom is also female. At no point have I ever looked at myself and gone, "Wow I'm a girl I need someone to help me." I do admit, I have seen it in action. I try to comprehend that it is 'real'. It is hard for me. Why would anyone downgrade themselves that way?

One of its side effects that I have noticed is hostility. I am often asked, pretty quickly, if I am really 'female'. I say yes, because I am. I've been told everything from "a real girl would not admit it" to "You are lying" to "you are just trying to bring attetnion to the fact that you are a girl for attention." The last one was told to me a few weeks ago in a chatroom I was hanging out in due to my use of emotes. It seems that my using my proper gender in an emote is my attempting to bring attention to my gender.

Then, about the same time that happened, I read an article on Cracked.Com called 7 Phrases That Are Great Signs It's Time to Stop Talking . I sat back and evaluated if I was running around slamming my gender into peoples faces.

I didn't think that I was. I did debate the title of my blog and bit and shrugged. I did not feel that every post I wrote was an attempt to define myself as a female. In fact, I did not think that I mentioned it very often. I even ran a search to double check.

So why do I sometimes find hostility about it? I polled male friends to ask the question. I was told that for some, gaming is such a boys club that they don't want girls in it. Another said that many that are hostile are uncomfortable around women and/or socially awkward and their discomfort comes out as hostility. Then there is a group that has only experienced female players are parasites and dislike their lack of 'seriousness' towards the game.

It makes sense to me. I may not feel that it personally applies. But, people don't know me. The ones that do treat me like anyone else they play with when it comes to skills and abilities. I won't say that social interaction is not different. It is. That is not a bad thing.

I'm not one of the guys.

It's okay. I'm not a guy and I'm terrible at pretending to be one. That does not mean that I can not and do not have a normal relationship with people. However, I'm not a boy. One thing I learned over the years is that boys and girls are different. Nothing is wrong with this. I however, am a gamer like any other. I hope that I have not been exhibiting bad and useless behavior based off of my gender.

I'd much more prefer it to be because of my personality.