For Loyalty or for Lulz?

Betrayal is a major fact of Eve gameplay. There is an entire forum discussion about a new player (see a month old) who accepted a random corp. He was turn blown up. It seems that this corp has been doing the same with others. He did not know that corp mates could kill each other since he had never been in a corp and I suspect he might not talk to others at all.

He received the general dose of non-pity mixed with explanations about what happened and why. It reminds me of when I had to look up HTFU because I kept seeing it and had no idea what it meant...

Corp theft, corp enrollment scams, corp scams, player scams, player theft, spys, lies and broken promises are all a part of Eve's gameplay. People who come from other games are often surprised. I have no idea why. So much of Eve's publicity is built off of the happenings of its world built by players. I'm continually surprised when someone idea that bad things happen in Eve.

One of the latest bits of player chosen betrayal Eve Skunk. To condense the service into my own words, people post an API key and the website pulls the Alliance Mails and posts them for all to read.

Some are interesting, some are hysterical, some are a piece of an alliances life.

We learned the other day that one of the null sec alliances in the area is moving out. It created some sadness. We've enjoyed tangling with them for the last month. We've had small fights and big fights and camp crashing and hot drops.

Now they are moving out per their alliance mail.

Which we so should not be able to read.

Maybe it is for the betrayal maybe it is for the lulz... maybe people are spys, I don't know. Eve is built as much from trust as it is from paranoia. From reading some of the alliance mails, there is horror in some groups that someone opened them up in that fashion.

It is worth noting the large alliances that are not up there. On the Eve Online forums there is back and forth about who Eve Skunk belongs to and what they are. The lack of several large alliances lead to accusations, finger pointing, and general tinfoil hat conspiracy theory paranoid.

However, it can be understood. Betrayal is one of the special flavors of Eve. Alliances have fallen due to internal betrayal. Eve is not always a game about the power of the pewpew. The social aspects are so thick that they are tangible. Playing Solo is a way to miss most of the game for the simple reason that the game is not all about the red crosses and menus on the screen.

I had to look up metagaming when I started playing. I'm shocked that it does not also link to Eve Online.

One of the big questions that flashed over about Eve Skunk was "Why".

Spies are a common theme in Eve. Information gathering is essential on many levels and for many reasons. Trust is earned and kept or destroyed. However, there is another emotion lurking around.

Distaste. I won't use hate because it is far to powerful an emotion. However, some people dislike their corp or alliance. Yet, for numerous reasons they are trapped there. Their reasons may or may not be valid. They are truly the only ones who can make that decision.

When I was downloading Eve, one of the things I read was a blog somewhere about not getting trapped in your corp. It discussed the fact that many players feel an intense loyalty for their early corporations even after they need to leave them. The negative feelings for their corp can eventually ruin the game for them and cause them to leave. Yet, they could have corrected that all by selecting, "Leave Corporation".

I was sure that I'd not have that problem. Yet, it took me about a solid day of being pissed before I clicked the button for leaving my first Corp. I felt that feeling that I couldn't/shouldn't leave. I knew it was bullshit but the pull was still amazingly strong. I left anyway, and for a few days I felt bad about it, as if I had done something wrong.

Loyalty is powerful. Joining a group is a tremendous pull. I'd hand my corp mates anything I owned (in game) if they needed it without thought. Now, take that emotion and twist it into the other direction. In a way, I can understand why people betray their alliances.

And unlike many other games, its a totally acceptable thing to do int he game mechanics. I won't touch on the morality of it. Everyone is going to feel different there. There are constant cries that things 'should not be allowed' in a game where almost everything is allowed. Just because it is the darker side does not mean that it should be quenched. Find a game where you can play an avatar of light or go become one in Eve and try to crush the darkness you detest. It is up to the players, not the game makers here, that's another thing that makes it so great.

We're sad to see our neighbors go. It was the good fights. Maybe whoever dropped their API into Eve Skunk will feel a little better or leave the alliance or continue to enjoy their life as a spy...

The Machariel's will miss you. 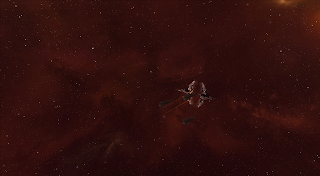