Lootin' all the wrecks errry day

Tonight's 100 jump roam took just under 4 hours. It was a good time and I got in on 7 kills (I'm amused at how little damage I do) and got a cargo hold full of loot. Because I have to get close to people I am normally close enough to scoop the lot and often I get to keep it. :D 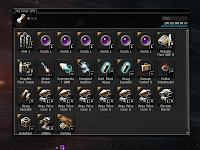 Anyway, the goal was an armor fleet. So we shipped up and decided to head to a new area. That area was 50 jumps away. I learned a lot today. Armor fleets are not supposed to chase nano fleets and nano fleets run away very, very fast and do not expect to be chased by said armor fleet. Also, lag sucks.

Very early in, we jumped into another fleet. There was a cool moment when they jumped to us and then went through a gate and we followed and started to lay into everyone. I had a moment of confusion. As we were ordered to jump the fleet commander (FC) says to spread the points (meaning lock down as many targets as we can). So I wind up attached to a hurricane like a leech. However, he is calling out primary targets. Should I leave the hurricane or not? I'm not damaging it much and its not shooting me...

I decided to hold onto it. A moment later the primary targets melted and one got away and I call out on coms that I have this hurricane locked down as the FC says to lock down the hurricanes next. Attention was turned and my target was called out as a primary. Yay! He swiftly melted under the hail of destruction the rest of the group laid down. I grabbed another hurricane after that and their fleet was dismembered.

That called for some sitting time to get rid of the GCC. The gate guns will eat you alive.

Huzzah. I checked in my corp chat that what I had done was correct. I was worried about not following the primary targets but I was also more of a tackle ship then a damage ship (as in I am a tackle ship because my damage is pathetic). I was told that I did the right thing. Learning what is meant for you and what is meant for others just starts to come with time. This is one of the first times that I felt that I really started to understood the flow of the commands, options, and fleet needs. In other words, I really started to have fun.

The next fleet that we meet was the nano fleet. We chased and chase and chased them but they slipped away because they were about 6x as fast as we were.

We also found another fleet playing games on a complexes jump gate. They attempted to bait some of us out, but that game is well known on our side. The lead pilots stayed within the logi ships range. In the end, that entire group warped off. Instead of another unsuccessful chase we just started to make our way back the 50 jumps home.

The other ships are ships that tended to jump into us. If it was slow, if it was shiny, it was vaporized if we could grab it.

There are so many little details to understand about fleets and working together. These are the reasons that I wanted to be taught vs running around and exploding until I learned. I am being taught and gods I try to learn what they are teaching. My CEO did spend about fifteen minutes harassing me about my skill points. Not in a nasty way but the teasing is amusing in many ways. If he actually minded me having such low skill points he'd never have let me in. As is, its just a harsh reminder for them about how new I am. We went over some of my near future goals when it comes to skill training and touched up on areas that I am very weak in. These are support skills. There are so many of them. It is easy to look at your skill list and think, "Oh guns, ship, armor, I'm golden." Sadly, no. You have to think about stuff like your weapon tracking speed, the number of targets you can lock, how fast your shields regen, how much you resist damage, how fast your ship turns to align, hell even how much cap you use to warp. It is a lot and its a massive uphill battle. But, I'm already starting to see the positives peeking out like spring flowers. I'm energized.

I think I will be okay as a logistics pilot. The logis get tired of not getting on the kill mails. I can understand that. They want to shoot guns and burn shit from the sky. I'm interested in the entire dynamic. In about two months I'll be able to releave some of the pressure by filling in as a logi toon. That makes me very happy.