It is new years eve and I am mining. I ran some missions earlier but I have not yet developed a taste for them without company. Everyone is out having real life celebrating. Me, I don't leave the house on new years. A holiday where its okay to get drunk off your ass is not one where I want to be prowling the street.

Not that I ever prowl the street. I'm a boring soul... but enough about me.

I'm also reading. ISK the Guide is something I wish I had read a month ago.... I'm catching up.

I'm mining. I have my alt out hauling my ore. I have two hobgoblin drones orbiting me and eating up the NPC pirates that appear. I spent enough cash on her earlier today setting her up with basic skills to learn. Right now, I'm working her towards some long skills because I go on vacation in a week. Skill training is real time in eve and time not spent skill training is wasted.

Earlier, I looked at her holiday gift implant and debated if I wanted to sell it or not. I still have to think about it.

Enough of my rambling thoughts. The space battle was interesting.

I'm in a system that happens to be a mission hub. Its a pretty quiet place and normally has very low to no ship kills. As my alt hauls her slow ass basic barge out of the station I see two ships who look as if they are engaged in battle.

Later, as I haul load after load of ore in I see more and more ships.

So I tried to take some pictures. 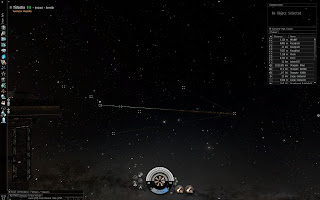 I kept my displays up so that the ships are bracketed properly. 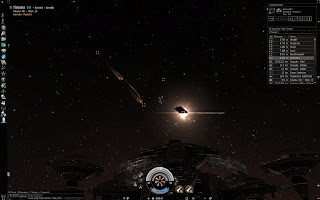 They had command ships out, battle ships out, the works. Ships are dying, people are running off and coming back. Drones are popping like popcorn and I just floated through the center because I was not involved.

Space battles. This is not NPC. Each ship is a player. There was an entire little battle going on. When you lose your shit in Eve its gone. Go buy another one. Hope it wasn't to special.