I've been playing for just under a month. My thirty day point is about to hit. I will be kicked out of Rookie Chat. I will miss Rookie Chat, it is a fascinating channel.

I've joined the regular Help Channel instead. It is a useful thing.

At this moment, I am leaving my Corp as well. Its early in the morning and my reasons for leaving are varied. I've learned a lot. I totally feel that people should join a corp quickly. Not something crazy but a group of players to get to know and learn.

I've met some wonderful people that way. My new life is going to be a bit different but fortunately not lonely. I'm going to make my own corp for a bit. It is a tax shelter really. If you stay in an NPC corp you lose around 11% of what you make off of missions and bounties. Instead, I will make my own corp and give myself 5% tax rate that I can access.

I hope to store it aside for the future.

I have plans for the future.

I am not a scammer or a thief so far in the game. I gave my corp back all the items I was using. I tossed some extra in for good measure. When my corp leader invited me, he gave me a Thorax that I named Sugar Cookie. I gave that back as well although it hurt a bit. It's odd that you can get so attached so quickly to something that isn't alive much less real.

I have a new home system that is not so far from where my corp was. I feel odd stepping on their toes so I won't do it. I loaded up my Iteron III and hauled my shit over. 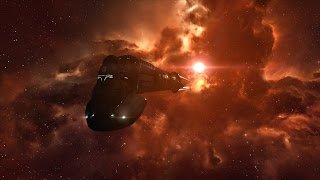 Many Gallente ships look like penises. It is supposed to be organic. I guess a phallus is.

I then did a dozen trips back and forth to move all of my regular use ships. Some I don't use, like one of the ships I first started mining in. Still, I am attached to that ship. So I keep it around. It did a good job for me and helped me make my first 10mil before I finished the Rookie missions and went off to explore space.

I feel like a bit of a bitch, leaving. You do develop ties and loyalty issues very quickly. Hopefully we can still be friends. It makes it sound like a bad breakup when I say it that way.