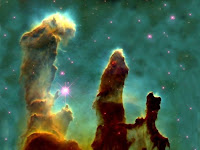 I saw this picture on a science magaizne today at the store. I walked by and saw it out the corner of my eye. The first thougth that game to my mind was, "Why is there an image of Gallente space in CVS?"

Obsessed with Eve a bit much, am I?

I was reading Gevlon's post about lossmails and the comments got me thinking. I wasn't thinking about the post or the reason everything is going where it is.

I started to debate the micro and macro levels of personal interaction with Eve Online. I blog my little self away becuase I am obsessed with soaking words in ~~ and then putting them up. Beyond that, my world view is micro. I am very new in the game and focused on learning it and becoming (hopefully) good at what I do.

I know the macro world is out there. I read the forums, I read the blogs, I read the news site, and I keep up on what is going on with the world. I feel that not understanding the macro would create a thinness to the texture of my microworld.

My view of Eve is very much tinted by the way that I play it and my life in low sec. Because of this, part of the discussion went into AFK cloaking, a topic that has puzzled me. What I found, in the discussion, was a missing piece of the puzzle and new understanding.

The people docking up and hiding are not PvP fit. That may be a 'Sugar, duh?' type of moment for most. However, I have been raised in an environment where every ship is a PvP ship. My corpmates often wait in anticipation to be scanned down in their missions, sites, and plexs for a fight. it did not occur to me that people were doing things in dangerous space in normal PvE fit ships. Suddenly, the aversion makes a lot more sense. My solution would be to undock in said PvP ship and move on, but that is not the point.

The point is, I've learned something to expand my viewpoint and bring me new understanding.

My two random discussions about Ammo today helped as well. I use faction ammo and have from early on because it was what I was told to use. However, I don't run missions and pour huge amounts of ammo into them. I was reminded that a mission runner has to look at ammo costs among other things.

I run sites that range anywhere from 5-20mil without me shooting more then a handful of NPCs. My ammo costs, diluted by my lp usage is not a big deal to me. My LP I have hundreds of thousands of because of level 5 missions. I was raised to use faction ammo and spend the isk. My lifestyle supports it. It makes sense in what I do.

I enjoy learning the differences in peoples game.

August 08, 2015
[15:32:10] Trig Vaulter > Sugar Kyle Nice bio - so carebear sweet - oh you have a 50m ISK bounty - so someday more grizzly  [15:32:38 ] Sugar Kyle > /emote raises an eyebrow to Trig  [15:32:40 ] Sugar Kyle > okay :)  [15:32:52 ] Sugar Kyle > maybe one day I will try PvP out When I logged in one of the first things I did was answer a question in Eve Uni Public Help. It was a random question that I knew the answer of. I have 'Sugar' as a keyword so it highlights green and catches my attention. This made me chuckle. Maybe I'll have to go and see what it is like to shoot a ship one day? I could not help but smile. Basi suggested that I put my Titan killmail in my bio and assert my badassery. I figure, naw. It was a roll of the dice that landed me that kill mail. It doesn't define me as a person. Bios are interesting. The idea of a biography is a way to personalize your account. You can learn a lot about a person by what they choose to put in their bio
73 comments
Read more